I’m guessing my DD6 will love this and will be a nice distraction from all the stuff she will want in the stores. Haha! What was everyone’s favorite one to do? I can’t imagine we’d get through all of them, so it would be good to prioritize them. I personally think her favorite pavilions will be Norway, Japan, and China…maybe Germany and/or UK. Are the Agent P adventures fun there?

We did China on our trip 2 years ago. Back then you had to use their tablets, and ours kept going wonky. Fun? You tell me what my face says: 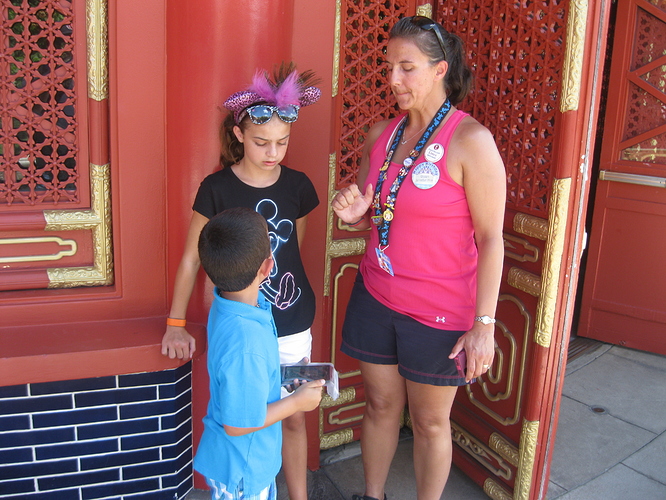 Now I think you can use your own phone?? The mission tself was fun though

Hahahaha, that is going to be my face many many times this trip. I did hear the phones were upgraded so hopefully that helps!

Germany and Japan were my kids’ faves. But, the way it worked for us was a CM had to initially kick it off using my phone at a sign up location, and gave us a choice of a few countries to start in. Then once one country was completed, the website gave the kids another choice. After the second one was completed, they had to see a CM again. At no point did they have all the countries to choose from - just 2 or 3 to pick among. Just so you’re prepared, you might not get your first choice, at least not right away.

I will say that assuming they do this for crowd management, they are geniuses at it, bc we rarely saw any other kids playing anywhere and a lot of the interactive surprises were just that, total surprises to our kids because (behind the scenes) Disney kept too many groups from stacking up in any one place.

I believe it’s the Mexico one that’s indoors. That was nice. It’s blisteringly hot or monsoon-level rainy often enough that an nice indoor activity is welcome. My kids also liked Norway.

That’s good to know. And that should be fine as far as having 2-3 options! I like the idea of crowd control. Epcot is such a weird day to plan. We will likely be back either in the evenings or on our last day, but I wanted to do the bulk of it on our first day there. It’s hard to choose what to do! But I really like the idea of a few attractions that I know DD6 will like and then just meandering around WS for the day. I want it to be laid back without a lot of standing in lines. Plus, we fly in from Seattle the night before so our time is going to be all messed up.

@Shanny81, I agree, and even as I was making a touring plan I was wondering how realistic the time estimates in each country were for us. Surprisingly, our total time in WS was pretty close to the plan. Once we started Agent P (which we adored!), we probably spent 45 min or so in those countries and essentially walked right past the other pavilions to get to the next Agent P country. It was nice having a choice bc there was always an option in the right direction, and the check in at Italy (I think!) was conveniently about halfway around. Happy touring!