What is the general thinking on 7am priority: ILL RotR or LL SDD?

I would do SDD first (ASAP) so you can get an early return time and start churning LLs. The RotR return times will be reduced by then, but since it’s on an independent system and doesn’t affect your ability to get another LL, it won’t matter as much unless you need a specific return time.

This is subject to change if RotR starts running out earlier, but for now it’s lasting until 9:05 or so. SDD isn’t running out until 10:30 or so, but the morning times are gone within minutes.

I was thinking the same. But I didn’t reply because others have been watching far more closely. Glad to see I was on the right track.

Cross-posting this bit of advice from the TP blog, which was posted in another thread: 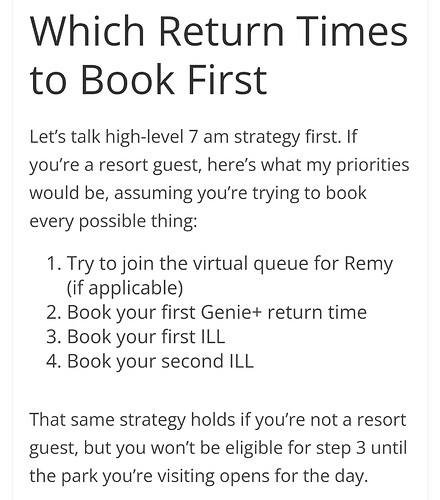 This supports what we concluded before: SDD first, then RotR.

And they said in the vids you can get a BG and an ILL for Remy if you want to ride twice so then that could be steps 1 and 3 on Epcot first day.

I personally wouldn’t do this unless it was my first time on Remy. If you’re doing two EP days, better to get a BG both days.

(Just saying the ride isn’t good enough to be worth it, IMO!)

The only exception to booking SDD first, would be if you are intentionally trying for a later in the day return time. I.e. stacking return times for an afternoon/evening itinerary.

I’m only doing one EP day for marathon week. I’ve never ridden it so I might do it for my Epcot day.

Ok in your case I might do it then. Some people really enjoy it! I thought it was fun but I’d rather do another attraction twice.

Does anyone know how this works with multiple people trying? Does that mess it up? Can only one person make reservations for the group? Or could my husband book an ILL for ROTR while I get a LL+ time for SDD? Thanks for any help!

I have not seen reporting on this, but I would assume you can have multiple people trying for different items simultaneously. Since that has been the case before for BGs, it stands to reason (hah!) that Disney’s IT would continue to work the same way for LLs.