This trip was our first trip since 2011 and our first trip as a family of 7. Our group consisted of Me, DH, DD 12, DS 9, and 6 year old triplets, - 2 DDs and DS. We drove to Orlando, stayed our first night with family, then started our first day at MK early in the morning. We had 5 nights and 6 days of Disney fun.

The alarm sounded at 5:45. We packed up our car The World just before 7am, excited for our 8:10 reservation at BOG. As we walked up to the Monorail, we saw the train stop above us, just before reaching the station. Neither line was running. At the conflicting instructions of CMs we walked one way to get a bus promised to take us to MK, were stopped there and sent back to the resort monorail line, and finally ushered to the resort bus stop. We were the last group to climb on the first bus. It was 7:20ish by then. We then spent 30+ minutes rolling through all four MK monorail resorts before we finally landed at the MK bus stop. The ferry that we could have waited for pulled up at the same time; I was thankful that we did not have to share bag check lanes with them! Security stopped my DH for having a carrying strap in his backpack (why? Why did he think he’d need that of all things?!? He gave no reason other than it wasn’t on prohibited items list. My trekking poles went through without question.)

My five kids crowded curiously around the tapstile as my husband tapped in and scanned his finger. Before I could even breathe my 6 year old daughter put her band up and my 9 year old son put his finger on the corresponding scanner. At the exact same moment. Whoops. It was a couple of days before we’d get that mix up straightened out, as the CMs had a habit of waving us through anyway. How is it always like that with kids? Sometimes they move faster than my brain can even process what is happening!

We hustled to the right of the Castle where a CM allowed us to pass the RD crowd that was already gathering. We were already 5 minutes late for our reservation. We finally checked into BOG at 8:20. DH and I were on two separate reservations, and his and our sons’ food came out within 10 minutes. 8:45 and the girls still didn’t have our plates. The servers started madly looking for it. At 8:50 I sent my DH and the boys out to line up for SDMT without us. I wanted my cautious 6 year-old DS on a gentle coaster before our first FPP on Space. The guys hadn’t been gone for long when our food finally rolled up. By this point I really wasn’t feeling the magic. It must have showed on my face (everything does, anyway) so the manager came over and granted those of us still waiting anytime FPP for anything except SDMT or PP. By the time the girls and I left the restaurant, the guys were getting off SDMT. My DH looked at me wide eyed and said that the line was all the way to the entrance by the time they got off. I don’t think he had believed me when I told him it was important to beat the rope drop crowd. We headed over to ride the teacups first, which was my TP even though it now seemed anticlimactic.There was no wait at all and the kids exited full of smiles and laughter which spun away all the frustrations of the morning. 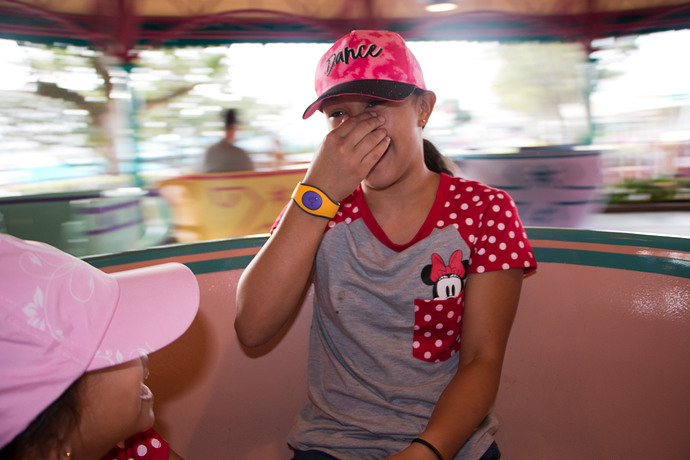 We then ran over to Buzz and used our 9:20 FPP for Space Mountain. DS6 didn’t like it, but continued to ride every ride. Mama win! I love this ride photo. This was DD’s first ever coaster ride and I thought she needed my hand. Clearly, she didn’t! 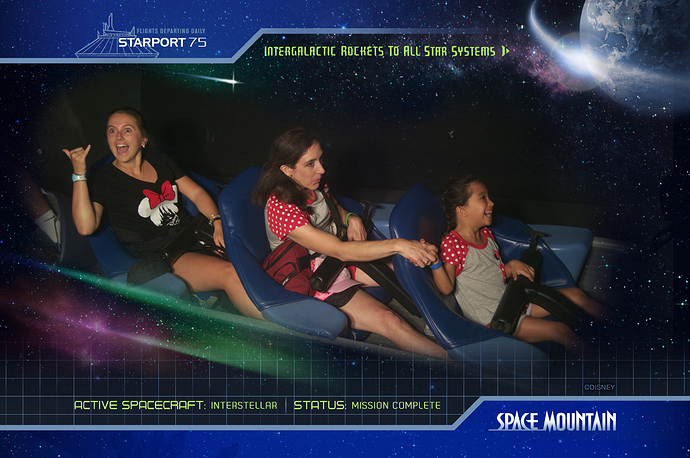 We took a restroom and water break and climbed into line for Laugh Floor. Mike picked my other DD (6) out of the crowd as Boo, which my kids found hilarious.

At this point I had a decision to make - TP had me hitting up HM before using my 10:20 FPP for PoC - but I was afraid we’d walk up to PoC in the grace-period and it would use my anytime FPP. So we saved HM for another day. That gave us time to watch the show now unfolding at the castle before tapping into PoC. At this point everyone said they didn’t want lunch yet, so we shuffled our TP, stopping in the heat for a Dole Whip and ice cream snack at Aloha Isle (mobile order for the win!).

This should have been the moment I realized that my picky yet often hangry child would continually attempt to throw a wrench in my best laid plans. He didn’t like/want any of the ice cream we offered him, and DH had packed everything in our park bag except extra snacks (because DDP, why would we need them?). It was still before our noon BTMRR FPP, so we then rolled into Country Bear Jamboree where DS turned into a pouty monster - as negative memories tend to fade, I can’t even remember his exact offense, but he went too far and I escorted him out of the waiting area. I was then THAT parent with the overstimulated, tired, hungry child throwing a tantrum in the middle of Frontierland as I tried to lead him towards the food that he clearly needed but didn’t want. I finally calmed him down and said he could go back in for the show this time, we’d eat after the show, but next time he’d have to sit out. I wanted to order lunch during the show, but was now separated from the rest of my family. The Bears were at least as terrible as I remembered them, but it was nice to take a breather in the AC and mentally regroup.

We found a place to sit at Pecos Bill and placed a mobile order. DH gave me a high five, saying there was no way he’d have been able to get through as many things as we had in so little time without my planning.

Refreshed and fed, we tapped into our 3rd FPP for BTMRR. In line I snagged our 4th FPP for IASW at 1:20. Sat in one of the back cars on BTMRR and had a great ride. We had some time to kill before IASW, so DH took the boys to Tom Sawyer Island (They saw a video and were excited, but I don’t know that they loved it in the heat.) while the girls and I used our anytime FPP to ride Splash Mountain. The FPP line on this one seemed longish, and my 12 year old repeatedly expressed concern about the drop. In the end, she loved it, and we were all glad to have another FPP scheduled for later in our trip.

Our next stop was IASW, where my kids had already learned to ask if we had FPP and if the ride was fast. Apparently my kids, especially my 6 year old DDs, have a need for speed, but they tolerated the iconic ride. We followed this with a restroom break and our longest wait of the day - 10 minutes - for Mickey’s Philharmagic. In line around 1:45 we received the texts that our rooms were ready. We all really enjoyed this show. Little girls had money burning holes in their pockets, so we did a little shopping before heading to the hotel. On the way to the Coronado Springs I snagged Soarin’ FPP for all of us at the 3:01 drop.

We did not get our exact room request, but scored Cabanas 8A, connecting water view rooms, which exactly met our needs. We unpacked and the little girls quickly dressed in their princess dresses while everyone else freshened up before we scooted back out to Epcot. 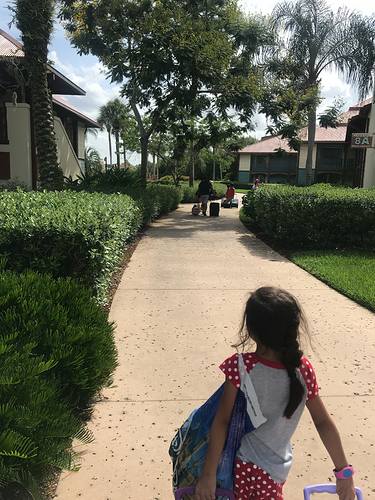 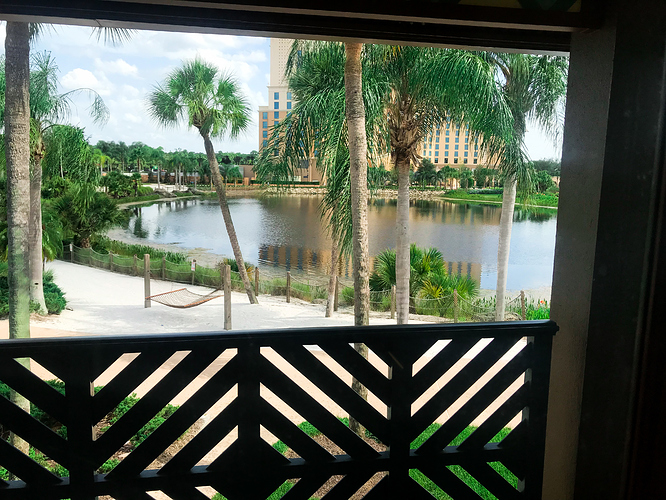 Surprise animal sighting in the world? A pair of coyotes as we pulled out of CSR!

At Epcot we used our FPP for Soarin’ before walking up to our Akershus ADR. On the way I pointed out the Anna and Elsa greet that I wanted to hit up after dinner. We really enjoyed dinner and meeting the princesses. The pork tenderloin I ordered was perfect. By then it was 8 pm with everyone tired after a full day and no one expressing interest in staying for Illuminations. DH offered to run my little princesses (6) over to meet Elsa and Anna while I signed the bill and left to take the other kids back to bed.

On the way out of the park my other kiddos were drawn in by the empty queue for SE. We rode SE and then played in Project Tomorrow. DH came with the girls who said they hadn’t met Anna and Elsa but instead saw them on “some boat ride” and did not enjoy it. 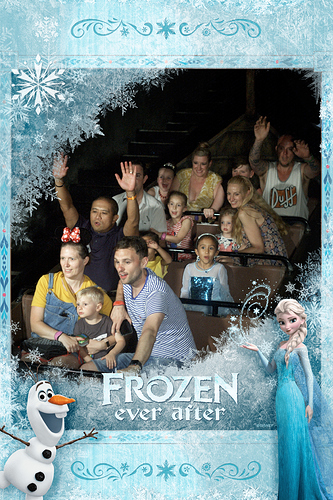 So DH learned not to make assumptions when at Disney World, and I crossed FEA off our RD plan for the following day. DH and DDs rode SE, kids bought ridiculous light up Mickey swords, and we slipped out of the park with the fireworks behind us.