Well, things were going along relatively swimmingly but a hydrogen leak has been detected yet again.

IDK about you, but I’d rather they exhibit extremely conservative efforts to push forward. That’s our tax dollars up there on that pad. And lots of them. I’d rather they delay a month and get it right than explode several million dollars because they are in a hurry.

100% agree. This is too important to screw it up by rushing it to meet a targeted date. Also selfishly I want it delayed so I can actually watch it. I don’t think I’ll be able to make 2:17 today which makes me sad.

Launch team is recommending a no-go.

NASA’s attempts to fix a liquid hydrogen leak to the core stage of the Space Launch System rocket saw a third failure when heating up the supply lines did not result in sealing the leak.

It was the same method NASA engineers tried early this morning, which also didn’t work, before an alternative method in which they tried to shoot helium into the lines to increase pressure also didn’t work.

Next steps are uncertain, but the planned launch window that opens at 2:17 p.m. could be in jeopardy.

They need to be safe, but I’ll be disappointed if they launch while I’m in Hawaii

oh, thanks for this link, I like the voice over. Sounds like they are trying to avoid a no-go as long as possible.

Yep, the launch director hasn’t decided yet, still doing lots of discussion. They still have time within the launch window.

scrubbed for the day

NASA is standing down on an Artemis launch for at least a couple weeks.
https://blogs.nasa.gov/artemis/2022/09/03/nasa-to-stand-down-on-artemis-i-launch-attempts-in-early-september-reviewing-options/

Thanks for sharing this. They discussed this on the local evening news. At least I’ll have another chance to see it

There is a different launch tonight… weather permitting… 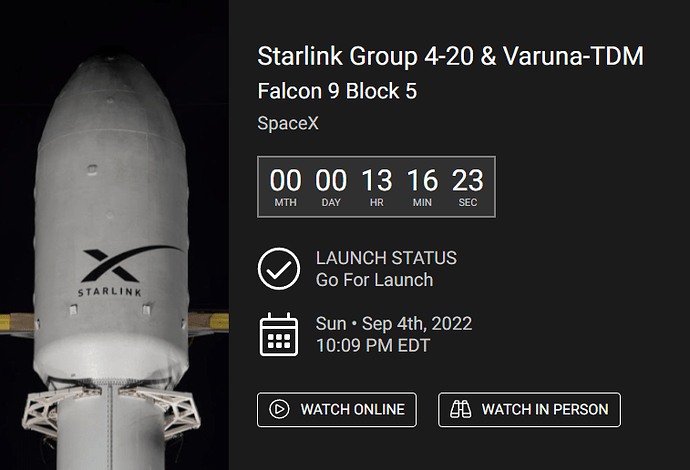 This will be my last post here for a few weeks; Aloha! 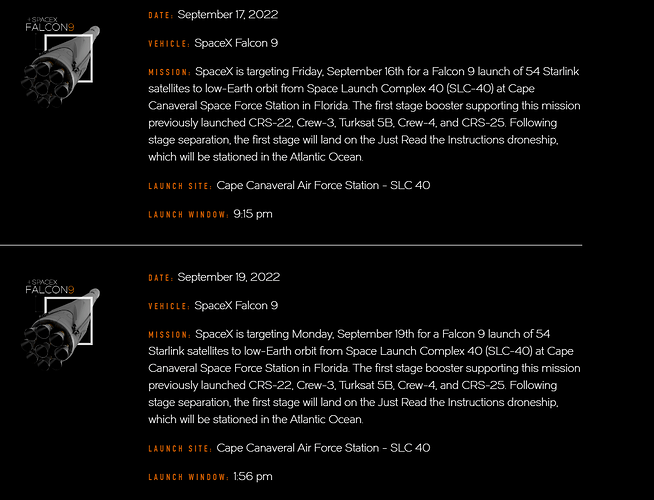 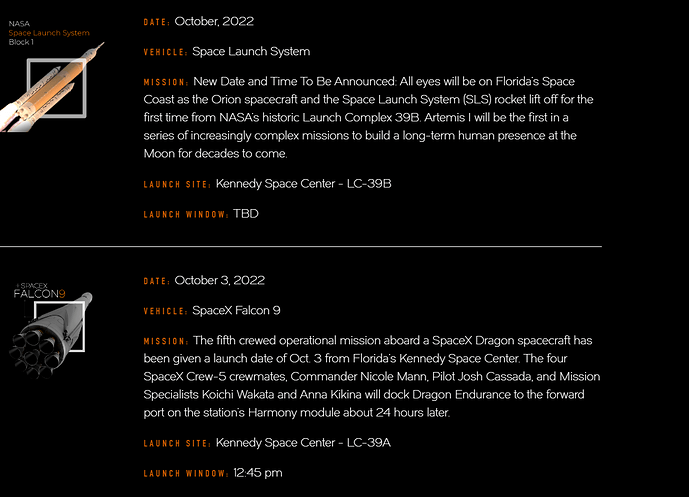 Ooh I wonder if we’d be able to see tonight’s rocket from the plane? We’ll be on descent by that time.

Also, I’ll have to try to remember to keep an eye out for Monday’s launch.

For some reason I thought Artemis was going to go off while we are there. I must have missed something that changed the timeline

I don’t think they announced the new launch date for Artimis yet.

I wonder if we’d be able to see tonight’s rocket from the plane?

That would be cool!!! I know when we were landing last night I could see the N. plant and that is looking in the right direction for a launch. I never get to see WDW from the plane

The fixes have been addressed, so now it’s time to add some stress to ensure NASA’s Artemis I mission success.

NASA says it has repaired fuel lines running from the mobile launcher into the Space Launch System rocket at Kennedy Space Center’s Launch Pad 39-B in the last week. Now, it will run through a full propellant load, targeting 7:15 a.m. Wednesday as part of a test that could give them a shot to launch as early as Sept. 27 to send the Orion spacecraft on a multiweek mission to orbit the moon.

Even though NASA officials were optimistic the hardware is ready for a potential Artemis I launch attempt Tuesday from Kennedy Space Center, a growing tropical system forecast to hit Florida as a major hurricane next week could force a rollback of the Space Launch System and Orion spacecraft to the protection of the Vehicle Assembly Building.

“We will take this a step at a time,” said NASA’s Tom Whitmeyer, deputy associate administrator for Common Exploration Systems Development. “We have to watch weather and incrementally make decisions as we go along. We’ll watch the direction, the intensity and the timing of the weather pattern. We’ll make the decisions when we make the decisions.”

Tropical Depression Nine formed in the Caribbean on Friday morning, but it’s projected to become a major Category 3 hurricane off of Florida’s southwest coast on Wednesday morning with 115 mph sustained winds, but tropical-storm-force winds could be hitting the Space Coast as early as Tuesday morning.

“While it is a threat to be watched, certainly and watched closely, it’s one also that we can manage as well,” said Space Launch Delta 45 weather officer Mark Burger.

The SLD’s forecast for Tuesday, though, still only gives a launch attempt a 20% chance for favorable conditions noting deep tropical moisture will spill across the spaceport with widespread cloud cover and scattered showers likely during the launch window.

“We’ve got a robust design, but we want to protect the vehicle,” said John Blevins, SLS chief engineer. “So we’re just going to look at what the forecast is and the assurance the percent likelihood of that forecast and certainly we’ll have to make a decision over the next 24 hours.”

The SLS rocket can withstand gusts of 85 mph on the launch pad, officials said, and in the event of a rollback to the VAB can withstand sustained winds of 46 mph.

“It’s a delicate balance … We don’t want to roll back if we don’t have to,” said Mike Bolger, Explorations Program Ground Manager at KSC. “So clearly the uncertainty of this storm makes a difficult decision and makes the timing difficult as well.”

Officials will wait for the 5 p.m. forecast today to see if there are changes, but could trigger a rollback, which would remove both a Tuesday launch opportunity as well as a backup of Oct. 2.

“We hope that we’re going to continue to feel like we’ve got some more time and that we can push the decision to Saturday morning,” Bolger said. “Obviously, the safety and health of our workforce is really important to us and that’s a factor in this decision that we make. So clearly, you know, it’s not simple. We would like to stay out there and we were hopeful that within this launch period we’re gonna get another launch attempt, and that’s why we’re watching the weather so closely.”

A rollback would take about three days to ready the hardware for traveling and make the slow 4-mile trip back to the VAB from Launch Pad 39-B. Previously, officials had said the rolls to and from the VAB can put more stress on the hardware, so if they can, staying at the launch pad is preferable. 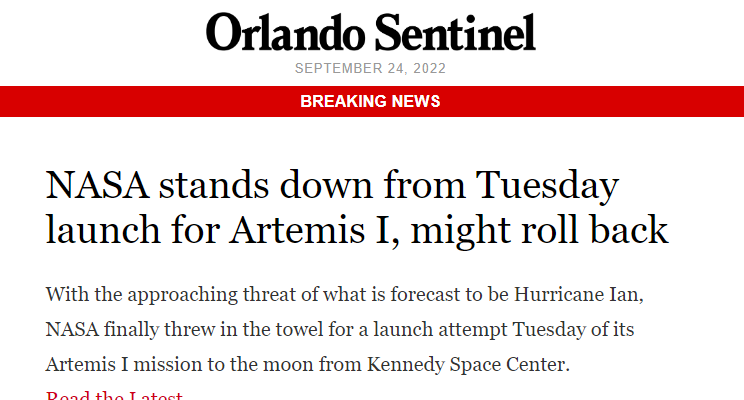 With the approaching threat of what is forecast to be Hurricane Ian, NASA finally threw in the towel for a launch attempt Tuesday of its Artemis I mission to the moon from Kennedy Space Center.

But it held off a decision to roll the massive 5.75 million-pound, 322-foot-tall combination of Space Launch System rocket, mobile launcher and Orion spacecraft to the safety of the Vehicle Assembly Building.

In an update posted to NASA’s website, the decision on whether or not to stay on the pad during the impending storm won’t be made until tomorrow.

“During a meeting Saturday morning, teams decided to stand down on preparing for the Tuesday launch date to allow them to configure systems for rolling back,” the update reads. “If Artemis I managers elect to roll back, it would begin late Sunday night or early Monday morning.”

That will allow another day of updated forecasts for what is currently Tropical Storm Ian located in the central Caribbean. Forecasts have it shifting north over Cuba and sitting off Florida’s southwest coast on Tuesday with a potential landfall near Sarasota as a Category 3 hurricane with 115 mph winds on Wednesday.

“The agency is taking a step-wise approach to its decision making process to allow the agency to protect its employees by completing a safe roll in time for them to address the needs of their families while also protecting for the option to press ahead with another launch opportunity in the current window if weather predictions improve,” the statement reads.

In a briefing Friday, missions managers noted the rocket was certified to endure 85 mph sustained winds on the launch pad. A rollback would take about three days to ready the hardware for traveling and make the slow 4-mile trip back to the VAB from Launch Pad 39-B. Previously, officials had said the rolls to and from the VAB can put more stress on the hardware, so if they can, staying at the launch pad is preferable.
“We’ve got a robust design, but we want to protect the vehicle,” said John Blevins, SLS chief engineer.

If managers elect to stay on the pad, the next opportunity to launch during this window is Sunday, Oct. 2, a 109-minute window that opens at 2:52 p.m. and fly for roughly a 41-day mission and land on Nov. 11.

After that, NASA would have to stand down until the next available windows on Oct. 17-31, Nov. 12-27 and Dec. 9-23. Each window has only certain days during which the Earth and moon are in the right position for the planned mission.

Artemis I is an uncrewed mission that combines the mobile launcher, Space Launch System rocket and Orion spacecraft. The SLS’s 8.8 million pounds of thrust at liftoff would become the most powerful rocket to ever launch from Earth besting the Saturn V rockets from the Apollo missions.

The Orion spacecraft will be propelled into a trans-lunar injection during which plans are to send it to as far as 280,000 miles away, 40,000 miles farther than the moon. It will make several orbits of the moon over several weeks before returning to Earth faster than any human-rated spacecraft has ever attempted re-entry, coming in at 24,500 mph creating heat of 5,000 degrees Fahrenheit.

The goal is to make sure Orion can endure extremes to keep humans safe on future missions. If successful, Artemis II could fly with a crew to orbit the moon in 2024 and Artemis III could fly as early as 2025 to return humans including the first woman to the lunar surface for the first time since Apollo 17 in 1972.

At this rate I might see it in November