We have activated our launch operations support team in preparation for the SpaceX Falcon9 CosmoSkymed launch. Window: 6:06-6:17 PM

Smart idea to keep a thread on this! I would love to see a launch someday. I think there was one when I was there but the cloud cover prevented us from seeing it.

so I thought I’d start a thread since I get notices for all the launches.

Fun stuff. I haven’t toured Kennedy Space Center in awhile, but have great memories of it as a kid and adult. So exciting!

Fab, hopping on. DP is super keen to see something when we’re there in July. We’re just figuring out logistics to see if a KSC trip would fit.

We have activated our launch operations support team in preparation for the SpaceX Falcon9 CosmoSkymed launch. Window: 6:06 - 6:17 PM

This is another attempt from yesterday’s scrubbed launch

I loved seeing the launch when we were there. Grateful that you alerted us. Thank you

Spaceflightnow.com is a great site. It says the launch is now scheduled for 6:11pm EST Saturday, Jan. 29.

On Nov. 10, some people could see that launch from EP and MK.

Sunday, January 30, 2022
The Canaveral attempt aims for 6:11 p.m. Sunday to take an Italian satellite into orbit from Space Launch Complex 40.

The payload is the COSMO-SkyMed Second Generation FM2 satellite run by the Italian Space Agency. It’s the second of four new satellites to replace an original four launched from 2007-2010 that provide defense, environmental and other observations for Italy and surrounding nations in the Mediterranean region.

Monday, January 31, 2022
The second Falcon 9 rocket originally on tap for this weekend was set to launch Saturday, but has now pushed to Monday. This one carrying another batch of Starlink satellites will take off from Kennedy Space Center’s Launch Pad 39-A, with a target liftoff between 2:50 p.m. and 6:30 p.m., according to the Space Launch Delta 45′s Weather Squadron.

If you missed Sunday’s launch it was bc it was scrubbed again.

We have deactivated our launch operations support team after a scrubbed launch of the SpaceX Falcon9 CosmoSkymed rocket.

Tuesday, Feb 1, there will be another SpaceX launch at either 1:56pm or 5:13pm EST (not decided yet). That will be a Falcon 9 rocket with Starlink 4-7 satellites.

We watched the launch in our neighborhood w/ several neighbors out on our street.

We have activated our launch operations support team in preparation for the Astra VCLS Demo2 launch. Window: 1 - 4PM.

Any scheduled for the next 12 days or so?

I’ll check, but I get an email on the day of and then one when it’s cleared or scrubbed. brb

This launch has been scrubbed today, but it’s still counting down… so I don’t know what’s going on 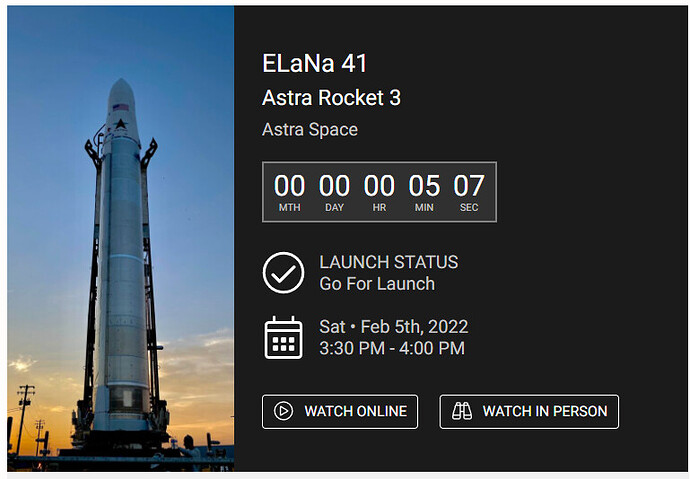 We have deactivated our launch operations support team after a scrubbed launch of the Astra VCLS Demo2 rocket.