This is less a trip report and more a stream of thought memories of our recent trip as they came to me.

We saw Wishes from 7D, Dumbo & BTMRR. 7D & D during same show, with this pic in between. 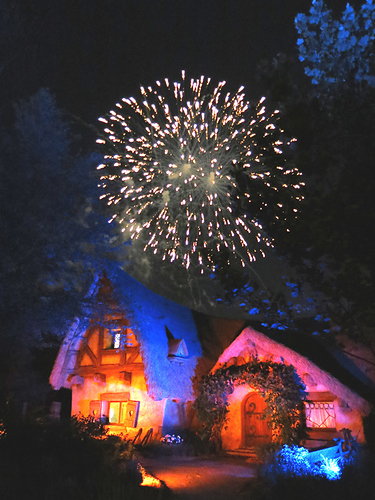 We saw MSEP from rocking chairs on the FL boardwalk. 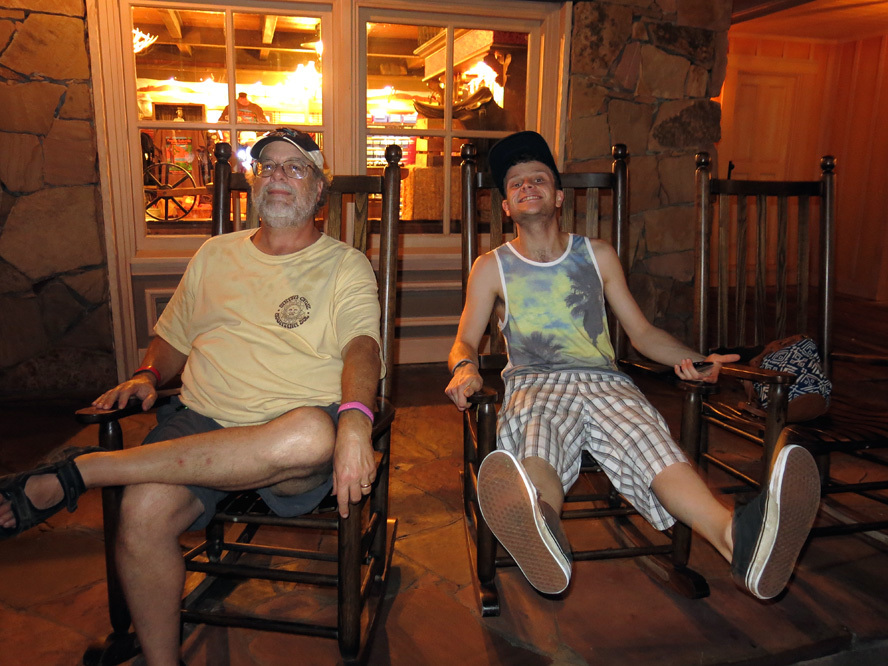 We saw Twister from the show control booth.

I don’t much bother with characters, but meeting Krusty the Clown in my
Krustyburger shirt was really fun. Plus Sideshow Bob is a Sharks fan! 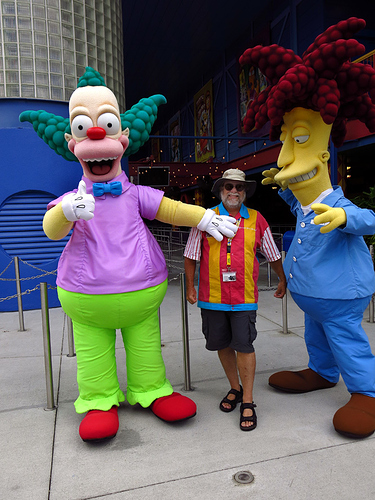 I was 1st into the queue for ToT (only other ride pic up was the CMs on
test ride). We also were on the last ride in our shaft of that night. 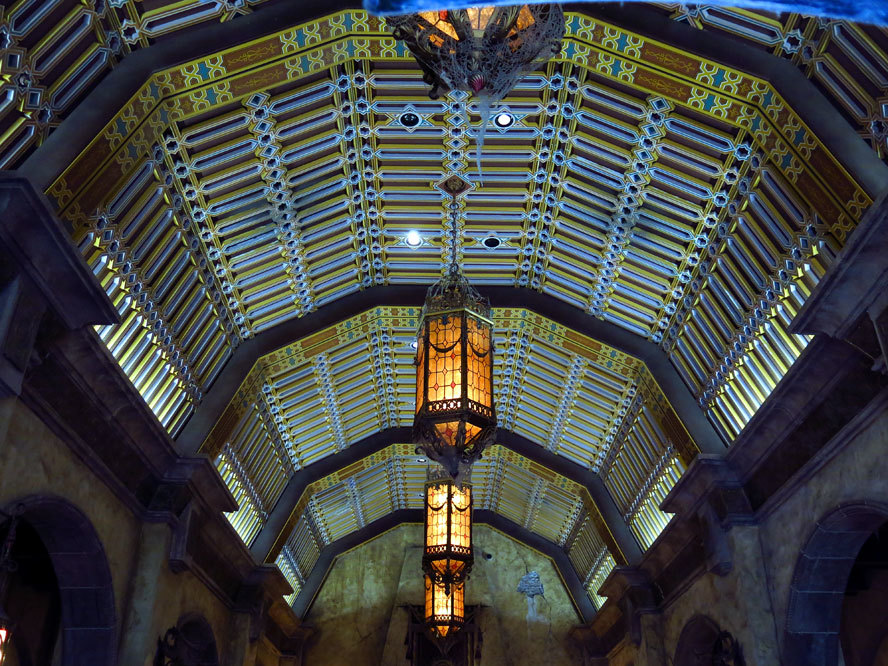 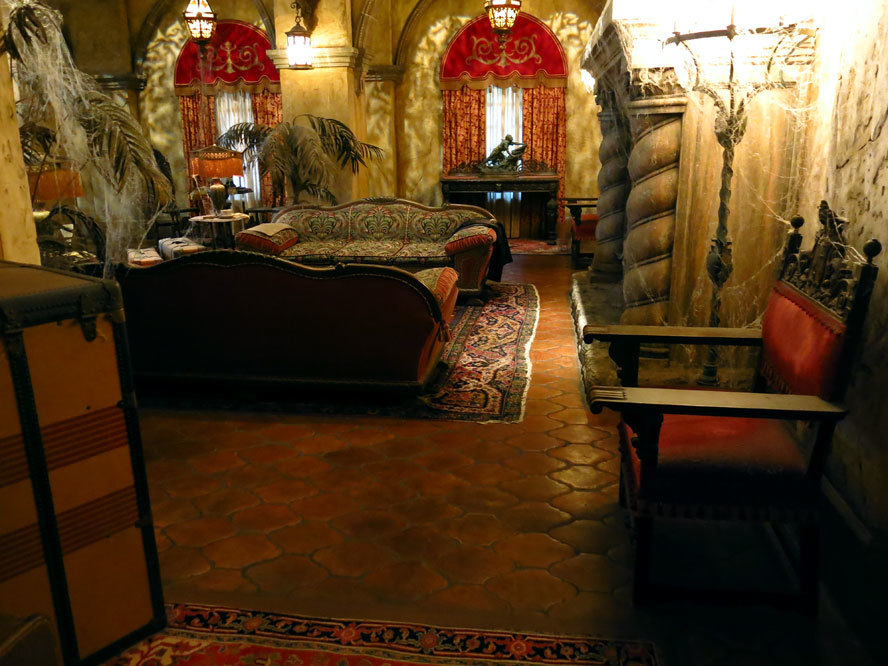 We saw the EWP from a porch swing at the Poly & then saw it again on
the boat to the MK, including the backside of the parade.

Got a few CM “wrong park” remarks on Krusty Burger shirt but one CM ran at me
from 25’ away for a hi 5. My beard got even more comments. All USO TM
remarks on my retro Epcot Ctr shirt were positive. 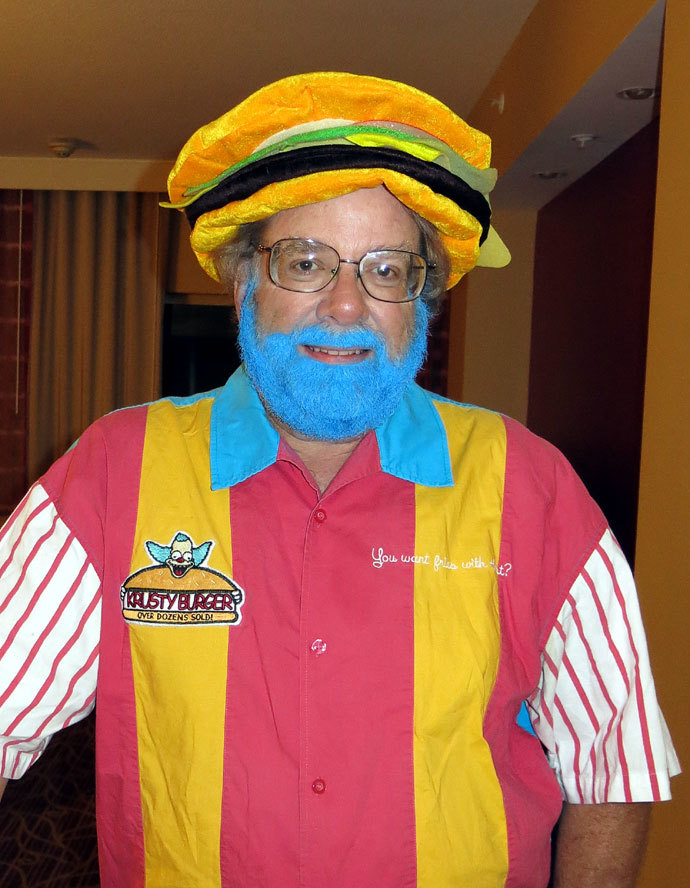 There should be a pool between every park & its parking lot. 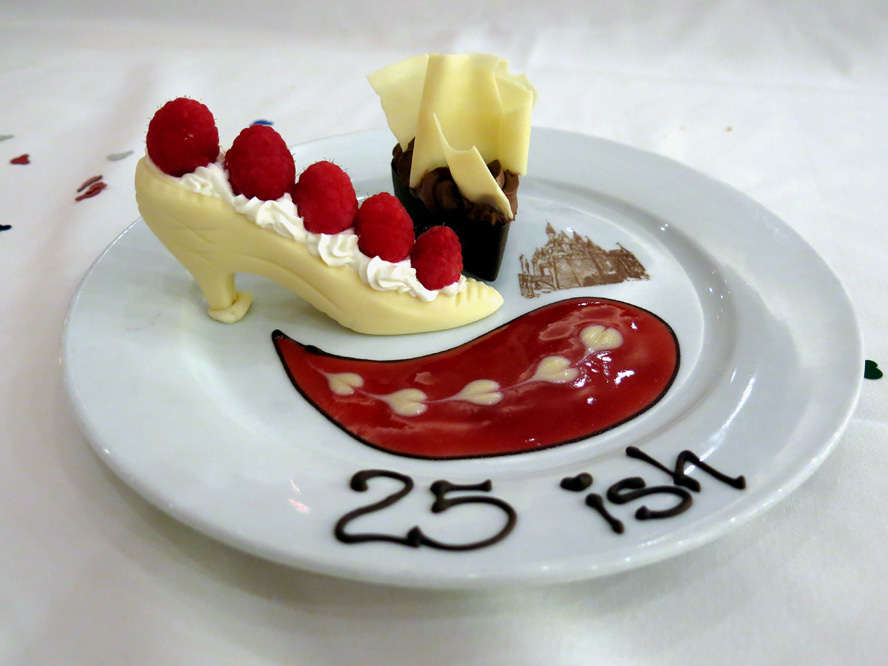 Chip Your Pets! My dog Sunny slipped his collar & hopped the fence. The
folks that found him had an appt at vet so took Sunny to check for chip.
Son’s GF’s Mom had appt for their cat at same vet THAT NIGHT! GF also
lost wallet at Mouse Gear; it was at Guest Relations by the time Epcot
closed.

Caroline’s cane/seat broke so we rented some
wheelchairs. I now know every incline at AK, that’s for sure. USO was
really great. They were ready to show us to lifts if needed as we
approached & we just left it where she loaded onto rides & it
was waiting at end. Not to say WDW was bad, just that USO was
Exceptional.

We decided to do the full Potter thing our 1st USO day, spending about 6 hours going through the story chronologically. What is truly amazing that in 2 parks and the train in between, we were (pardon the “I” word) immersed into that world completely not seeing anything else during that time except maybe a glimpse from the Dragons. 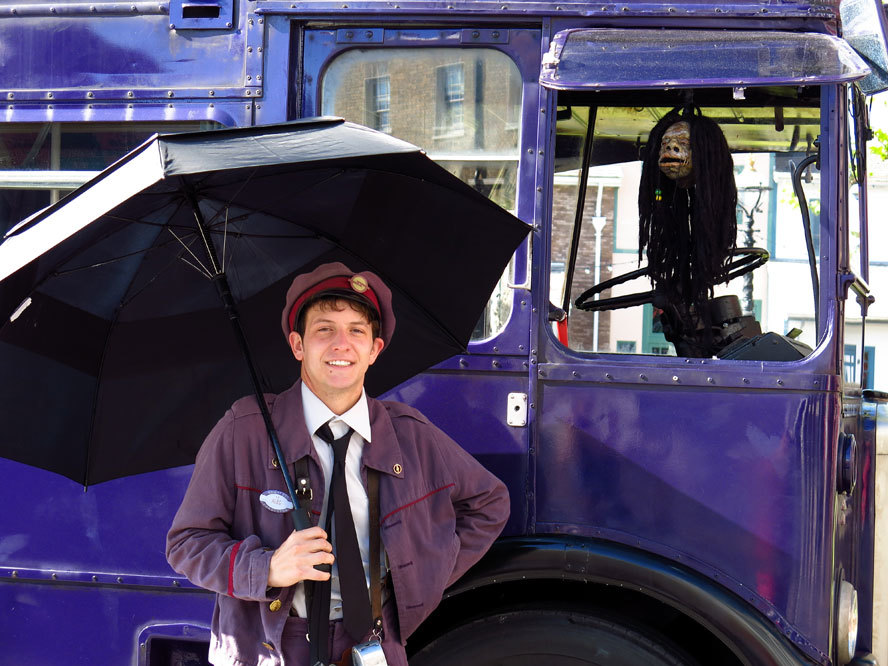 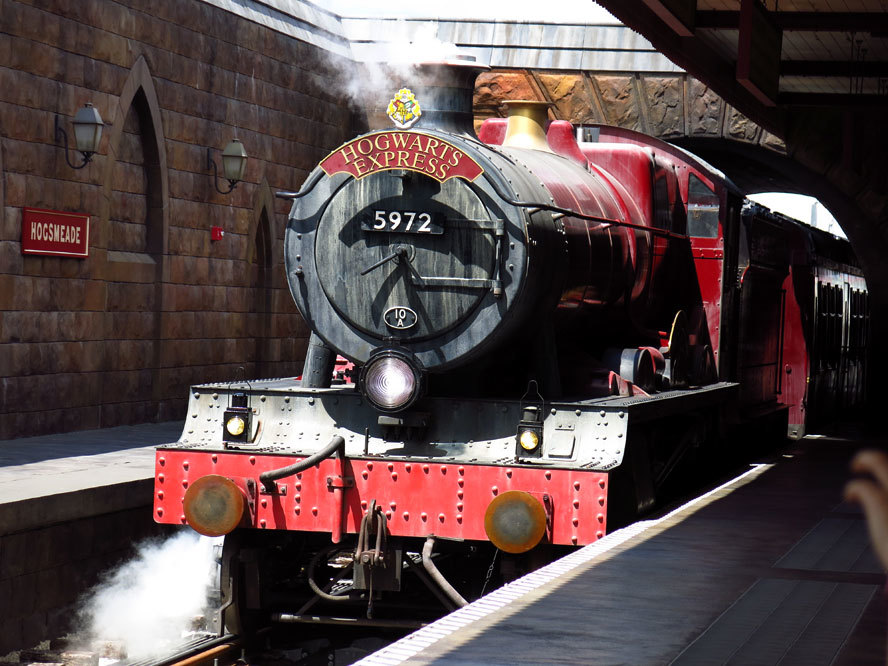 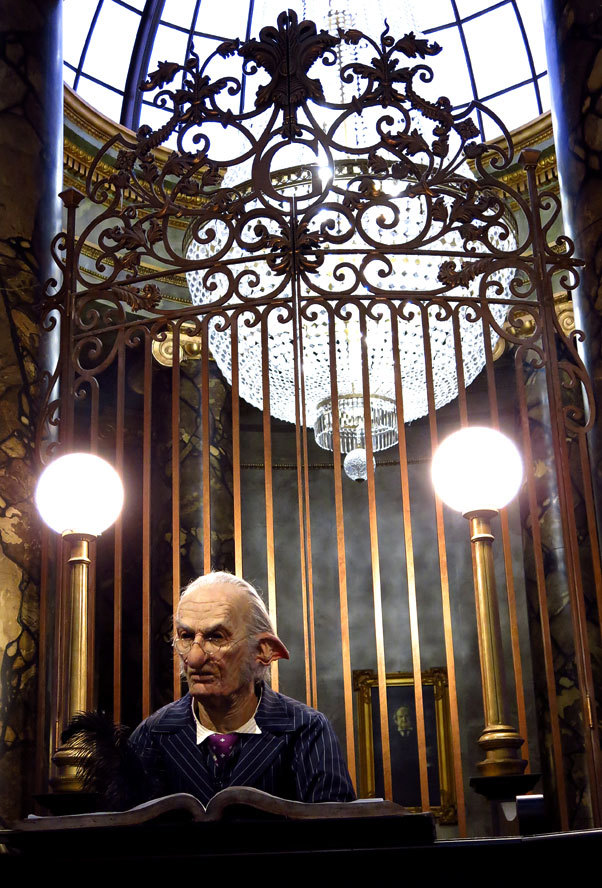 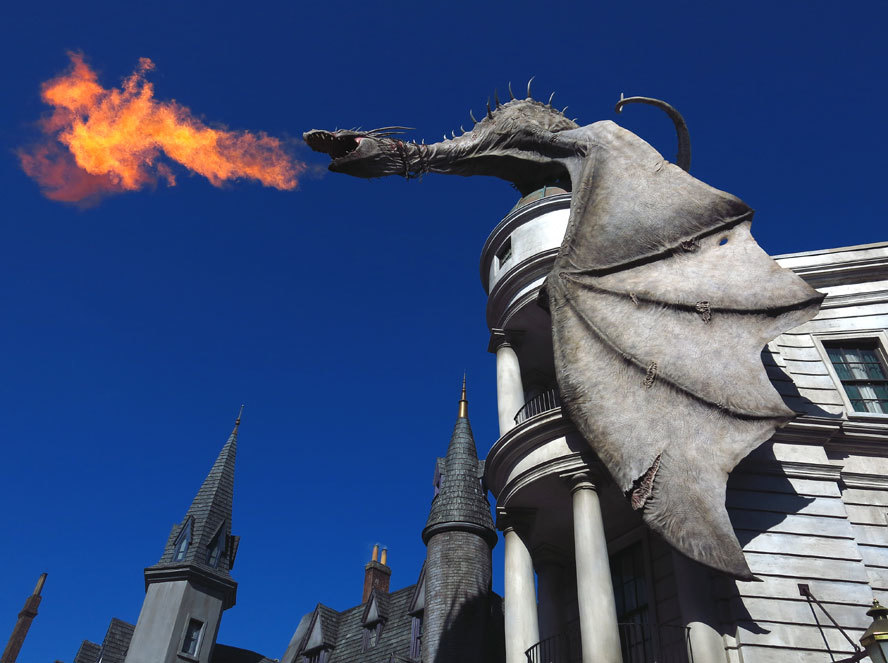 Flaming Moe is clever & tasty, & by far the
worst value around. The cost to increase 12 oz to 16 would be
negligible. Choc wand is worst price per oz, choc cauldron is best.
Refills on USO mugs/bottles are truly indefinite; got one for $.99 on a
sport bottle from 2005 (then it got left behind at boat dock).

Trash is worse at WDW than DL-period. I will pick stuff up that will fit in an empty pocket on hiking trails, and have started doing this in parks as well. On the plus side that got me a voucher for a counter svc meal w/ drink & dessert plus a rubber
Elsa head for my MB. But the same pile of partially crushed grapes was
in front of a MK bathroom for at Least 3 hrs. There are HUNDREDS of hair
ties littering the ground where the train stops before going backwards
on EE. No roller coaster opens for the day without the tracks being
walked, so this is known (& not a mechanic’s job obviously). I don’t
know if this is a diff in guests, CMs, management or a combination, but
it’s inexcusable.

We were offered 2 consecutive rides at close on Rocket Dumbo & early during 24 hour day on Splash.

If changing a FP+ or looking for ones after using 1st 3, keep refreshing
your search. Due to leaving condo late I wanted to change a Dino from
10:30 to 11:30 & only options were after 3PM. I kept trying &
eventually got it. My bro had a 7D Miracle, getting 2 FPs in the evening
on Memorial Day by doing this! Said even CM was shocked.

We got the lights on Spiderman experience after ride stopped where we were “ascending” to the top of the bldg. Unfortunately camera was in a Hulk locker.

Size at MK is really apparent after the last few years w/a DL AP; walking
the span of that park feels like teleporting by comparison.

Favorite comments from the trip: “he’s so cuuuuuuuuute” from a kid seeing a lion
on KS. “Just run him over” from the same kid when a horned critter
blocked the road for 5 min (I think the beast is replying here). 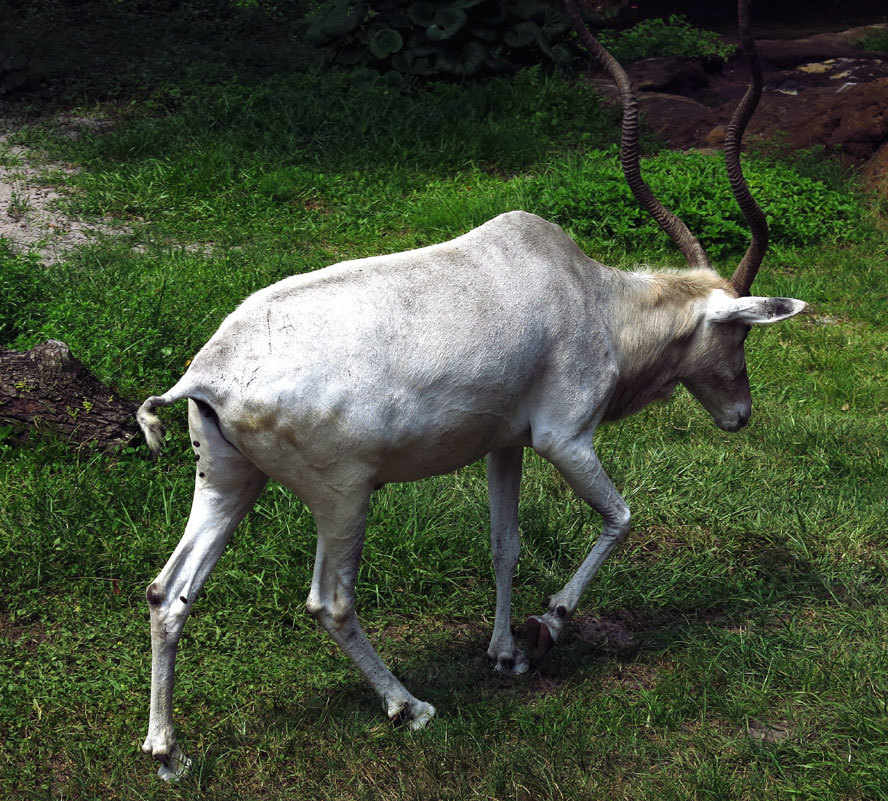 “You know this is a line for the slide?” asked of me by a 5 year old girl at the condo pool. Told her I haven’t grown up yet.

Bananas make the Minons go nuts; get some plastic ones & have fun. 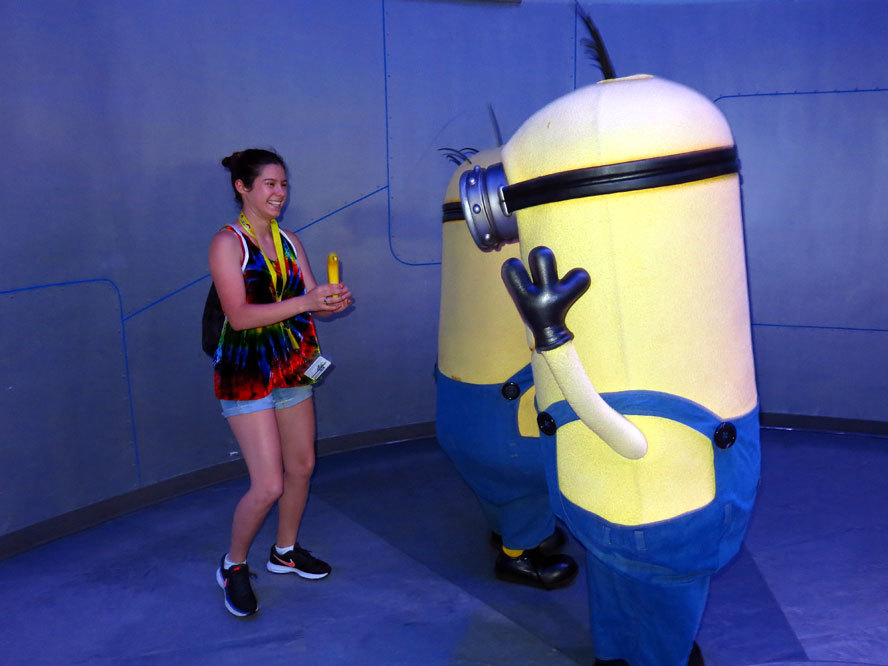 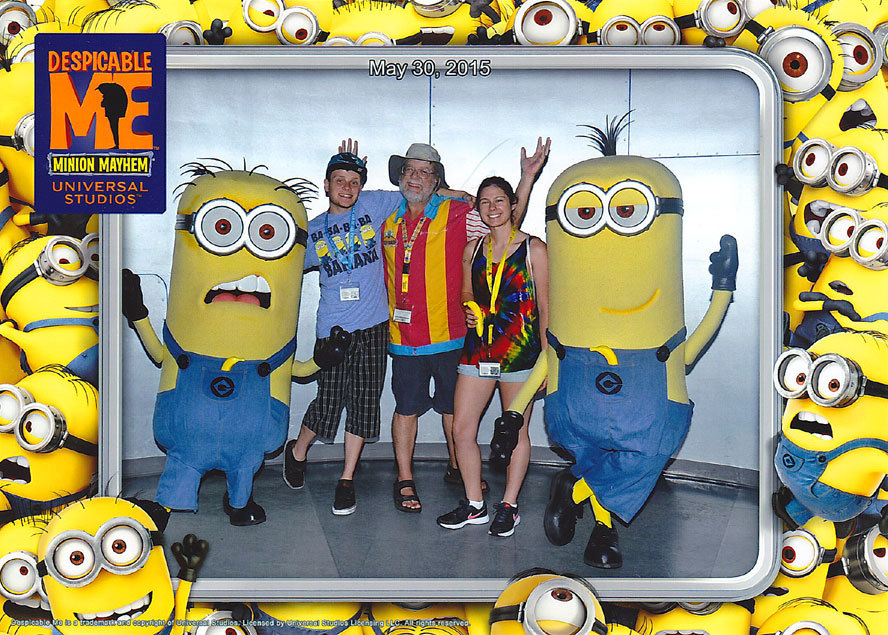 When they mentioned the 500 degree table at Teppan Edo I wondered if I
failed to think things through by eating there. It was really good
though with a decent enough AC. Plus we got an extra discount when
drinks server dropped my AP on the hot griddle.

We decided to all be Bob on ET; TM found it increasingly amusing as we got our cards. Wish we had filled a bike; when repeating “Bob” ET sounds like he has a
stutter.

The Stormtroopers opening at SW weekends is really
funny & holds up to the hype. Shoot, compared to most park opening
shows it’s the greatest piece of live theater ever staged. 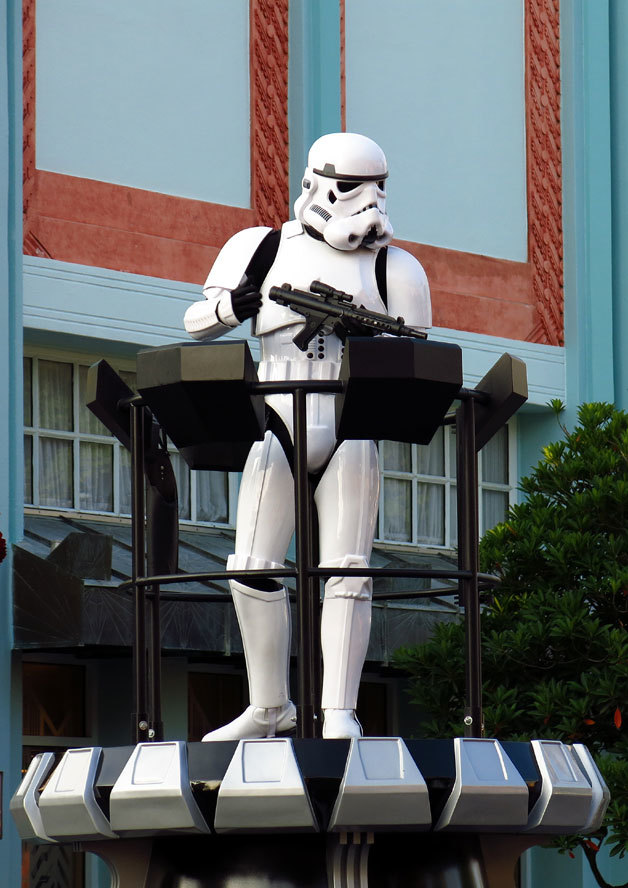 Got a hand painted ornament at IOA. Since trip involved ourselves from Cal
& Bro from Bama I wanted it to reflect that. Finally came up with a
teal shark (SJ Sharks) & red elephant (U of Alabama) on a roller
coaster. She was really excited to do something that different &
clearly anxious for my reaction; and <$20 total!

I tracked down a Krystal (southern White Castle) in the heart of Kissimmee’s
payday loan district. It seems to be a good place to find a Krystal
burger, crystal meth, & Christol that works at the Landing Strip Club.

Finally, there are 3 important rules for those traveling in groups.

I also have more photos here; thanks for looking.

View the full album on Photobucket.

Hi Marc! Looks like a great trip back to the hottest place on Earth…I mean the happiest, of course! Enjoyed your pictures and thoughts.

If the boy hasn’t made it out of college by the next trip bad luck for him because it will be in Nov or Dec.

your pictures are great!